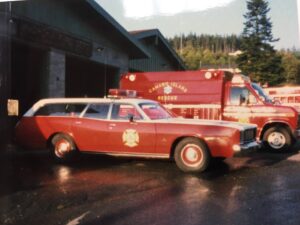 Fire and rescue services on Camano formally began in 1945, with an all-volunteer team serving three independent fire districts. The first fire station constructed on Camano was the Camano City station on Orchid Road in 1946.  The Madrona station followed in 1953.   The Mabana station was constructed in 1956, then Country Club in 1972, and finally Terry’s Corner in 1977.

The three original, independent fire districts on the island merged in 1992 to form the unified Camano Island Fire and Rescue, which voters then approved later that year. CIFR hired its first paid chief, Scott Koheler, in 1993, and its first paid firefighters in 1998.