COVID-19 VACCINES AVAILABLE APRIL 22: Appointments will be added at 1 p.m. Monday, April 19.
Bookmark this link to schedule for April 22.
click here to learn more about the clinic 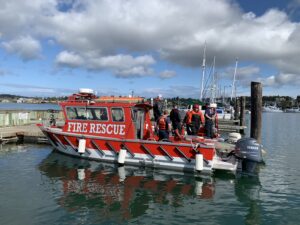 When you live on an island, water rescue is very important. Camano Island has, on average, more water rescues than cardiac arrests. Too often, the victim isn’t wearing a life jacket, and time is everything.

During crabbing and shrimp season, the number of boaters increases dramatically on the island. As a result, every firefighter with the department is trained for marine rescue. With three boats, including a 28 foot fireboat, CIFR’s more than 40 water rescue technicians and 13 fire boat operators are increasingly prepared. 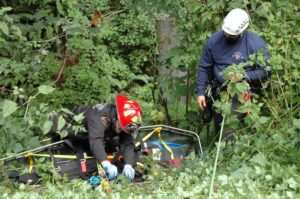 Rope rescue operations are a critical piece of the technical rescue response on Camano Island. Much of our shoreline is high bluff, and often it is a homeowner’s pet that goes over a cliff. If we don’t go get the dog, nine times out of 10 we’ll have to go after the owner instead.

The department commits to training every career firefighter in rope rescue; six team members are at the technician level, requiring at least 40 hours of training, though most have 90 or more hours. In addition, the rope rescue equipment and methods are frequently used in other rescue operations, such as fire incidents and car accidents.