After 35 years as part of Camano Island Fire & Rescue, Commissioner (and former volunteer firefighter) Steve Lich is retiring at the end of 2021.

When asked how he wants people to remember him, his answer was simple: “I hope that people think I did a halfway decent job.” 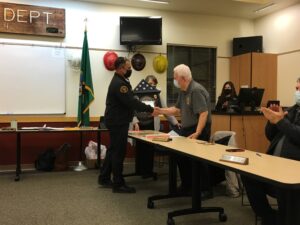 Camano Fire Chief Levon Yengoyan thinks Steve did more than just a decent job. “He’s given countless hours ensuring that fire and EMS protection in our community was, and always continued to be, first-rate,” he said. “To me, Steve represents exactly what our elected officials should be. Professionally I will miss his knowledge and experience. Personally, I will miss his leadership, mentorship, and guidance. I wish him the very best in his retirement.”

Steve’s career with Camano Fire began in the mid-80s, when he and his wife bought a cabin on the island. “My nextdoor neighbor was a member of the little fire department up the hill on Chapman,” he said. “So I joined there. We didn’t have a lot. We weren’t doing so much of the aid calls as they do now.” Steve remembers that the all-volunteer department in those days rarely had more than a dozen total volunteers at any time.

“I think our budget at old Station 1 the first year I was there was $47,000 or something,” he said. “We could just barely afford to pay for the gas and the insurance.”

Doing the, as he puts it, “firefighter-type, hero-type” work wasn’t his passion. He always wanted to get into the administrative part of the fire service. And he got his chance in January 1991, when he was elected to the original Camano City Fire District No. 1. 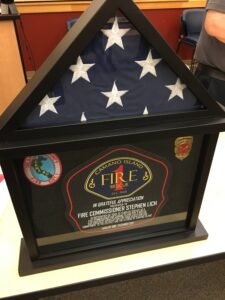 In his 30 years on the board, he’s seen a lot of changes – from the three island fire districts merging into one in 1992, to the hiring of the first paid fire chief in 1993, to the acquisition of the current Administrative building in 2008.

“Steve has always been the go-to guy for anything related to the fire district,” said fellow Commissioner Paul Williams. “The history he shared and his experiences were invaluable.”

Merging the fire districts was a key factor in growing the department to what it is today. “The big accomplishment was the merger,” Steve said. “They weren’t doing that a lot at the time in the state of Washington. We were one of the first.” The chiefs of the three districts were all for it, and figured out a way to get their 125 volunteer firefighters to work together.

As the department grew, it needed more space for the administrative staff it took to run the business side of things. They soon outgrew their original offices in Station 3, at Terry’s Corner, and moved to rented offices at the Camano Commons. When the opportunity came up to buy the current office in 1998, the Board approved the venture – and it saved nearly $500,000 over building a brand-new administrative office.

“I guess the best part was, the board was pretty much – when you agree on something, everyone agrees,” Steve said. “There wasn’t a lot of anti-whatever the decision or policy was. Everybody was in accord at the end of the discussion. That’s very important.”

Assistant Fire Chief Craig Helgeland first met Steve when he was a board member of the pre-merger Camano City Fire District. “Over the decades, Steve has served in many supportive roles with Camano Fire, including our initial LEXIPOL program launch back in 2013,” Helegeland said. “His keen eye, fire service knowledge, and sharp memory continues to be a distinct advantage for the fire district.”

Over the years, Lich has seen members of the Board of Commissioners come and go, but the Board as a whole has always been pretty cordial. “Everybody brings in their expertise and their background,” he said. “Up until not too long ago, it was all fire people who were commissioners. Now we’ve got a lot of citizens who don’t have any particular experience with the fire department. And you get a different aspect.”